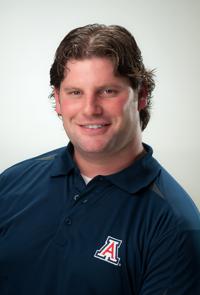 Chad is in his first year with the University of Arizona, and this will be his first head coaching opportunity. Previously he coached under “Chico” Adrahtas, as the assistant coach at Robert Morris University-IL. While at RMU-IL, he had an overall record of 113-36-4. In his final season, for the first time in school history, RMU-IL won the CSCHL League Championship, the CSCHL League Playoffs, and finished as the runner up in the 2014 ACHA National Tournament. Chad’s primary role was working with the defensemen, where he prided himself in player development.

Chad’s playing career took him to Toledo, Ohio, where he played for the Toledo Jr. Storm and was able to put up 107 points in 50 games. That season opened up further opportunities as he landed in the NAHL with the Springfield Spirit and eventually Lansing Capital Center Pride. After his Jr. career, Chad went on to play NCAA Division 3 hockey for Jeff Meredith, at Sunny Fredonia.

Chad moves here to Tucson with his partner Sarah. They have a 2 ½ year old son named Grady, who enjoys playing music, sports, and being the Arizona Wildcats' #1 fan.